Posted by David Catalano on Friday, 24 October 2014 in Small Miracles

Welcome to SmallMiraclesTV! Our production team has worked long and hard to deliver episodes based on the fantastic true stories from the acclaimed best-selling book series written by Yitta Halberstam and Judith Leventhal. Our next episode that we are presenting is called "A Soldier's Note", the remarkable story of Capt. Robert Ellicombe in 1862 during the American Civil War.

While producing this episode we were lucky enough to have two Civil War regiments working with us, 125th NYVI Co. D located in Troy, N.Y and 124th NYVI Co. A "Orange Blossoms" located in Orange County, N.Y. Both regiments have the goal to honor the soldiers who have fought and died in the Civil War. Their dedication to this cause brings them to recreate battle scenes for the public in states like Virginia, Tennessee, and Georgia and for film productions like SMALL MIRACLES.

During production, they came equipped with full uniforms and guns that were authentic to the period. They even worked as Technical Advisors to us on the project and helped the Art Department by supplying tents and other authentic items that our budget wouldn't otherwise allow us to obtain.

It is also worth noting that our bugle player, John Charles Thomas, is a member of the Grammy Award-winning Chestnut Brass Company, which performs music on original instruments. One of the sets of instruments is a set of 19th Century (Civil War era) saxhorns. The Chestnut Brass Company have long played music from the Civil War era on them, in addition to music of earlier and later on their respective instruments as well.

The bugle that Mr. Thomas was playing on the shoot was obtained for the filming from the Miller Musical instrument Collection of New York. It is a 19th century "clairon d'ordonnance" which is the type of military bugle (made in France) that virtually all of the US and CSA armies were outfitted with. Some of the instruments were made of brass, and some were copper. The instrument that he used was made of copper.

p>Some time ago Mr. Thomas took the instrument to the West Point Museum in West Point NY, and compared it to the bugle that sounded "TAPS" at Appomattox Court House by a member of U.S. Grant's company at the surrender of Robert E. Lee (the Army of Northern Virginia). The instruments are identical in construction, length, pitch, etc., the only difference being that the West Point bugle is made of brass.

So often in filmmaking the credit for a great piece of work lands on the lead Actors, Director, or Writer…and most of the time the accolades are well deserved. This time I felt that it was important to give proper credit to the two Civil War regiments and master musician John Charles Thomas. Without them it would've been impossible to accomplish what we did with our time and financial constraints. Filmmaking is a collaborative medium. It truly takes many specifically skilled individuals working in harmony for a common goal. Everyone who worked on this project deserves credit for their contributions to this episode…but without our Civil War reenactment team…it simply would not have worked.

This episode is dedicated to the many Men and Women of the Armed Service who gave the ultimate sacrifice in defending this great nation of ours. And to the Soldiers currently in service defending the United States from points all over the world, we salute you!

To everyone else who has viewed this episode, Thank you!….and remember that November the 11th is Veteran's Day... and Small Miracles happen everyday.
0 Comments
Hits: 6670 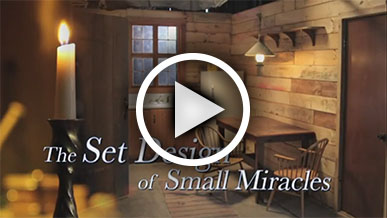