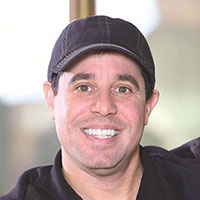 Darren Schwartz was born, 11-23 1969 at Brooklyn Jewish Hospital to a ‘lower middle class’ modern, and extremely lenient Jewish family. Darren grew up on the streets. Fast. Being a kid in those neighborhoods one had to get tough. So consequently Darren was exposed to things better not experienced by children, yet vital to his survival.

Then tragedy struck. When Darren Schwartz was 15 years old, arguably the most vulnerable time in an adolescent boy’s life, his dear father passed away. Suddenly, Darren had to shoulder the responsibility of being the ‘Man of the House’. And being the ‘man’ of the house meant providing. Darren was surrounded by neighboring communities where kids and families all had fancy cars, large homes, and extravagant lifestyles. He figured ‘You are what you have’ and set his mind towards fulfilling that dubious mission. ‘Getting more stuff’.

Darren dropped out of high school and to a construction job in the dead of winter. He started to make money. But not enough. Never enough although it was miles more than he’d ever had. He saw people with degrees making more money out in the world, so he went back to school and graduated. At age 18 Darren Schwartz left Brooklyn. He took whatever jobs came his way and financed his own way through college studying architecture. Darren learned ‘when you pay, you pay attention!”

Darren’s last ‘odd job’ heralded his entrance into the tobacco industry. He worked for a tobacco wholesaler in the warehouse and delivered orders. His Boss, who would later become his future wife’s stepfather, saw Darren’s strong work ethic and knew he was an asset to his growing company. Within 10 years of working at this company, Darren went from the loading dock to the Board Room. He learned the tobacco business inside and out and was soon interacting with the ‘movers and shakers’ of the industry. It was then that he learned about a new phenomenon called the “Discount Tobacco Store”.

In 2002 an opportunity was put in his life and Darren jumped on it. He suddenly found himself the proud owner of a chain of 16 Tobacco stores. Today, Darren Schwartz is owner and operator of 43 stores some with the growing phenomena of ‘Hookah Lounges’. From his first year as an owner, to today, Darren has made more money than he every dreamed of. All that ‘stuff’ he deemed so important back as a youth is ripe for his picking. But he has come to realize that ‘stuff’ doesn’t fill you up…Darren still had what we call a ‘G-d sized hole’ in his being. He knew there had to be more to life.

So Darren Schwartz started up his relationship to G-d for two reasons. The first was that he was full of fear that he’d lose all his success and prayed with much gratitude to keep his new found wealth. The second reason was because he learned he now had a responsibility to do good deeds with his money. He prayed for a vision to understand what he should be doing with all his gifts. And the answer in Judaism is to give. To help others. Especially to help others help themselves. Suddenly that hole in Darren was being filled with joy and gratitude.

Reb Darren began to explore Judaism and all the real riches that are inside the Holy Torah. In 2008 he went on a 9 day ‘Spiritual Journey’ with his Rabbi. This trip opened him up. It was there that Darren understood he was a “Baal Teshuva’” (see ‘About Us’ for definition) and not only had a responsibility to uphold the Laws of the Torah, but he had the resources opportunity to spread that Light. Before leaping head first into this, Darren was given wise advice that he continues today. Take ‘baby steps’ in his Spiritual Growth in order not to fall.

Today, Reb Darren Schwartz owns and runs several companies and has been fortunate to be involved in many projects that have touched lives around the world. And then it happened. On sunny day in my office in Rock Hill, N.Y. Darren was visited by a firebrand of a woman named Rebbetzin G. Silber. An older woman with the energy of a 12 yr. old, R. G. Silber was demanding to meet the person responsible for providing food for the upcoming Passover Holiday for hundreds of people. (which happened to be Darren).

When Mrs. Silber returned to her home in London, she sent a lovely Thank You note to Darren, and enclosed a book she had authored back in the Seventies, DOVID MEYER, THE ORPHAN FROM JERUSALEM. Darren loved the book. It brought him tears of laughter, sorrow and hope. The next time Darren saw R. G. Silber, he told her the book would make a wonderful movie. Mrs. Silber went into a tirade of how she had sent to book to the biggest Jewish machers in the film industry, but only received rejection notices or nothing at all. Welcome to Hollywood.

Enter Moshe Mones. Another Baal Teshuva. (As told elsewhere) Introduced to Darren via their respective Rabbis to talk about Moshe potentially getting involved in marketing Darren’s business ventures. Then Darren took a look at Moshe’s bio. Instantly asked Moshe if he wanted to read a book to potentially create a film from it. Moshe agreed he would read this book by Rebbetzin G. Silber entitled DOVID MEYER and give Darren his best assessment of the project. Cut to: Next meeting. Darren Schwartz and Moshe Mones are making the film, DOVID MEYER. It was also at that same meeting that Darren held up another book which happened to be in the room, SMALL MIRACLES OF THE HOLOCAUST and said, “Here’s our next project.” Moshe looked at him. Right in the middle of yet another ‘small’ miracle in their lives and said, “I know the authors”.

And so many miracles later. Darren Schwartz and Moshe Mones have created with the help of G-d the Inspirational Media Company 26Entertainment. They’ve just finished the feature film DOVID MEYER (where Darren learned quickly to be a wonderful movie Producer) and are working on distribution. AND…are about to embark on producing a television series from the best selling books…SMALL MIRACLES by Yitta Halberstam and Judith Leventhal.