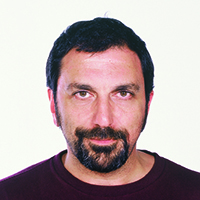 Jerry was born in Cleveland, Ohio. At the age of five his family moved to Harrison, NY in Westchester county. In 1975 Jerry auditioned for a Woodstock based group called Orleans and got the job. Soon afterwards he found himself in L.A. recording the "Waking and Dreaming" record, played on his first hit "Still The One" and on the road,with Orleans, supporting Jackson Browne. Orleans founding member, John Hall, left the band in the summer of 1977 and as the band took time to decide what their next move would be Jerry flew to London and started working with ex.Genesis lead singer Peter Gabriel. For the next ten years Jerry divided his time between recording and touring with Peter Gabriel, Daryl Hall and John Oates, Tears for Fears, Orleans, Joan Armatrading, & Paul McCartney.