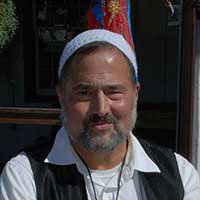 Rabbi Moshe Mones (a.k.a. Paul Mones on Google and imdb.com) spent many years as an actor/writer/director/producer in the Hollywood Film Industry. Before that he studied with Lee Strasberg at the Actor’s Studio in Manhattan, worked for CBS Local News, played in bands, won first place in the PBS young filmmakers awards and sold shoes. He was cast in an ABC TV series opposite Patrick Swayze (THE RENEGADES) and brought out to Hollywood for the first time. He had, as they say, ‘arrived’.

Rabbi Moshe worked as an actor in films, t.v. and theater, wrote a novel (A Song for Modern Man)produced and directed original plays off-Broadway one of which ‘The Beat’ became his movie directorial debut, producing it with Jon Kilik (Hunger Games etc.) Nick Wechsler (American Assassin, Sex Lies and Video Tape etc.) and Julia Phillips (Taxi Driver, The Sting, Close Encounters). The very off-beat ‘The Beat’ kicked off a series of award winning films for Rabbi Moshe as well as large ‘Blockbuster’ movies.

In 2002, Rabbi Moshe decided there were other Paths to explore in life and left the business of Film and Hollywood. He became a teacher in Upstate N.Y. creating experiential learning programs (called Mythix) for Public and Private schools. He started and ran a Summer Day Camp at Woodstock Day School servicing 200 children a day. He was having a ball. At that time R. Moshe also started traveling back and forth to Israel. And it was in Jerusalem that Moshe Mones was ‘opened up’ to the Universe and dived head first into his Judaism.

The next number of years R. Moshe spent years learning with Rabbis and institutions around the world. He started a ‘Chavrusah’ (a Jewish study group) in Woodstock N.Y. Finally @2009, Moshe Mones was given ‘lay Semicha’….the title Rabbi.

In 2010, R. Moshe Mones, with a group of ‘Woodstockers’ opened up The Tinker Street Shul (Synagogue) in the heart of Woodstock. R. Moshe was head Rabbi and was sure G-d and life had led him to his heart’s desire. But, as always, G-d had other plans.

R. Mones became seriously ill in 2010/2011. He was told he had an unstoppable progressive, fatal disease. By Spring 2011, R. Mones had to give up The Tinker Street Shul, and deteriorated to being bed-ridden. Preparations were being made for full time care and Hospice. After an already incredible life, Rabbi Moshe Mones was preparing himself for ‘the World to Come’.

Enter an angel. In the form of a Doctor and amazing human, who just happened to show up in Upstate N.Y. from working in the MidEast for years. R. Moshe who could barely walk by then was taken by other angels to see this Doctor. The Doctor just looked at R. Mones, pronounced he could reverse the progression of this disease. Within one month of treatment, Rabbi Moshe Mones was coming back to life out of the dark tunnel. A true Miracle. With more Miracles about to shower down around him.

Without a synagogue, or steady job, because of his illness, R. Moshe prayed to G-d to show him what to do. As he was getting B’H stronger every day, R. Moshe was introduced by his own Rav (Avraham Sender Goldberger) to MR. DARREN SCHWARTZ (See his Bio) to talk about a possible job. Now Mr. Schwartz is a very successful businessman/philanthropist who also shared the journey of coming home to his Judaism later in life. There is a term for a person who makes this journey of ‘returning’ to Judaism, the term is“Baal Teshuva”, which translates literally to “Master of Return”. In fact it is said that a “Baal Teshuva” stands at a higher level than even a wise man” (Rambam’s Code of Jewish Law: Laws of Teshuvah 7:4) Why? Because the ‘Baal Teshuva’ has been to deep dark places where a righteous person dare not go and now the Baal Teshuva has the opportunity to bring the Light to those areas. Both R. Moshe and Darren Schwartz are Baalie Teshuva.

That is why that despite the fact their meeting was for a whole different agenda, Darren Schwartz, after seeing his resume, told R. Moshe about a small book he read called “DOVID MEYER: The Orphan From Jerusalem.” Mr. Schwartz thought it’d make a great movie…and what better way to spread Light in the modern world than the mass Media? Mones figuring he’d happily help out, read the book. The book, touched and ignited a dormant spark in R. Moshe. He agreed with Mr. Schwartz, here was something special.

With relative lightning speed, Darren Schwartz found himself for the first time in his life on a movie set Producing his first movie, and Rabbi Moshe Paul Mones, went from his supposed ‘deathbed’ (G-d Forbid) to being transported, back to writing, directing, producing (and even acting), with a Grade A crew and one of the best casts R. Moshe has ever worked with. But this was a whole different experience than any other production R. Moshe had ever worked on. It was literally a Blessing. A Gift. A Miracle. From start to finish.

The result is the film, DOVID MEYER. Wrapped in 2013. Focus screening comments and viewer ratings of the film have been through the roof. The film plays for mainstream and ‘Faith’ audiences. DOVID MEYER has Jews, Agnostics, Evangelical Christians, Hindus, everyone…laughing, crying, and filling them with Inspiration. DOVID MEYER has thus far won at the Moondance Film Festival “Best Picture”, “Best Director” and “Audience Favorite. DOVID MEYER was also debuted in New York City as an “Official Selection” of the Socially Relevant Film Festival. All screenings of the film have been sold out and again, audience reaction is rating a ‘10’.

There are more Miracles afoot: SMALL MIRACLES. R. Moshe, Darren and their new 26Entertainment are now in Post Production on four episodes of their new television series SMALL MIRACLES, based on the Best Selling novels “SMALL MIRACLES” by Yitta Halbertstam and Judith Leventhal. Starring Judd Hirsch and Kathryn Kates (Orange is the New Black), SMALL MIRACLES fulfills the dreams R. Moshe has harbored for decades: to shoot a highly stylized, black and white, anthology for television. And so he got the chance again because of a melding of minds with Darren Schwartz. Influenced by the old television classics “The U.S. Steel Hour” and “Westinghouse Playhouse” and even “The Twilight Zone” R. Moshe and his crew (hats off to D.P. Adrian Correia, Jerry Marotta music, and Production Designer Jesica Farkas) shot a knockout series, with incredible casts, and true life stories where each one inspires the audience to look for Miracles in their own lives. SMALL MIRACLES is a stylistic and content full ‘tour de force’ that will appeal to a broad demographic, because there is something for everyone. More episodes to come.

Now, as DOVID MEYER and SMALL MIRACLES seek their place in global distribution, R. Moshe Mones and Darren Schwartz have their Sparks burning bright. 26Entertainment is launching on the web to set a standard for Inspirational Media. Rabbi Moshe knows all of this is possible, because he has discovered that his own life is constantly full of immeasurable Miracles.